TIP-121: Proposal for the future of the Tribe DAO

Why does this proposal explicitly separate the dissolution of the treasury and the hack repayment.

It needs to be revised and more numbers need to be given for clarity.

It is not clear that “hack victims” are “Creditors”

Hack victims lost assets because they took risks. This does not represent a debt. While it may end up being repaid, I think it’s important to point out that this is not in the same class as FEI holders, for example.

Any repayment would need to pass the DAO, which did not happen last time it came up.

Why do you think they are not creditors? Using a DeFi product should not present significant risks to the end users. The victims take risks - liquidation risk, illiquidity risk etc., not risk of poor due diligence. No one is going to use the product/service being offered if users lost confidence in the DAO not compensating the hack victims, and then it is just a death spiral for the DAO.

While I am not personally affected by the hack, I was involved in other protocols that acted in good faith after significant risk events, e.g. InsurAce commitment to make their LPs whole after paying out UST depegs, Scream directs future protocol revenue to victims. Compensation should be committed to the hack victims even if over a longer timeframe, but in this case, the DAO can clearly afford to pay them out.

The DAO could have afforded to pay them out when it was voted on too-- however they voted against it.

I think those who took risks by using Fuse accepted that, in the event of an exploit, they may lose their money. There should be no expectation of repayment. The same is true when you use Aave, Compound, Maker, and whatever other lending protocol. Also, given that the DAO is dissolving, it makes far less sense to repay hack victims for future prospects or “good will”. I suppose we’ll see how the DAO feels this time around when it comes up for a vote.

Aave literally has an insurance fund…

@FeiLabs and @JackLongarzo - can you please provide the projected calculations behind the proposal? It is going to be near impossible for the community to reason about the proposal without a shared understanding of the financial implications for all stakeholders. I’ve attempted high level calculations myself and the recovery figures don’t make sense.

Here is a quick updated overview shared from a friend (original credit to DCF_god): 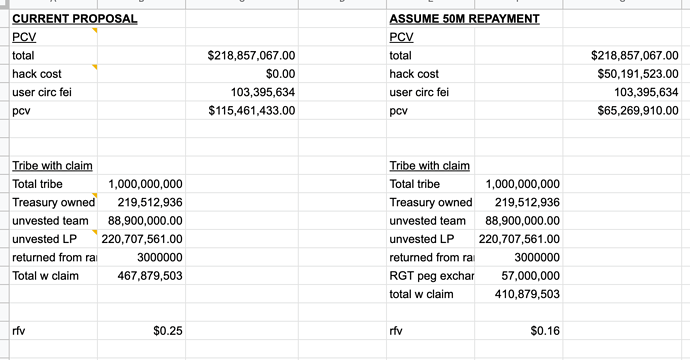 The left side shows the net intrinsic value of TRIBE as proposed (using 57M TRIBE), the right side shows the intrinsic value after a full recovery for hack victims from PCV. The price of TRIBE was approximately $0.144 before any “odd” price action ahead of the public release of the proposal. This calculation shows that all FEI users and hack victims could be made whole and each TRIBE would still be redeemed for a 10% premium to the pre-annoucement market price.

Instead the proposal suggests compensating hack victims with an arbitrary amount of TRIBE which feels like a backhanded way of saying let’s just repay approximately 28% of the hack amount so that we can keep the rest. Furthermore, the 28% is unevenly split so that some DAO’s are 100% compensated while others receive as little as 3%. Then you want to pocket the rest and just go on to your next venture? Do you think it will be that simple? Many of the large TRIBE voting positions are known and the Tribal Council are known individuals. Why would you want to leave yourself this liability when it would be very straightforward to make everyone whole. If it weren’t for the Council’s previous veto the hack victims would already be repaid and this would be a much simpler dissolution. We risk a repeat of that situation where PCV drops as the market falls and it’s a shame because it will then be used as an excuse for why repayment can’t happen (the sad comedy is if PCV pumps into the merge afterwards).

I’ve been in this industry since the early days of Ethereum and this feels so greedy to me. You use terms like “Tribe” and try to harness the goodwill and positive sum attitude of Ethereum and yet here we are. Think about your reputations going forward - either way Fei is done. You have a chance to make everyone whole, move on cleanly to your next thing and still have $65m leftover for TRIBE holders (which was approximately the market cap of TRIBE before the announcement). Why not take it? Is an extra 50% really worth it?

The snapshot would have passed to repay victims if without the influence of the team. You are suggesting TRIBE holders should be exposed to the upside only, and no downside from any vulnerability of the products. This set a bad precedent for DeFi as a whole, how do you expect people to adopt DeFi when it is so risky/unsafe?

Aave stakers get slashed if the smart contract gets exploited - you can find it under the Shortfall Event section, it’s called the Safety Module. IMO dissolving or not should not change the answer to whether the hack victims need to be paid out. In fact I don’t think Tribe should dissolve just solely because Fei Labs want to step down. The DAO looks to be viable even after paying out the hack victims, dissolving should be the final solution.

Absolutely. It seems like a deliberate attempt to squeeze more money.

.25 rfv is dependent on vested being burned.

I think that would just be fair.

@FeiLabs however you slice the cake, the PCV is more than enough to make everyone affected whole plus secure an ample return for $TRIBE-holders. Anything short of a complete reimbursement at this point can only be described as complete cronyism and greed

I’m on both sides of this equation, and I have zero interest in pocketing some extra $$ in a zero-sum game at the expense of affected retail users

Your unrelenting lack of empathy continues to astound me. I - as a former FEI enthusiast - am quite ashamed of being part of what has revealed itself to be nothing more than a money-grabbing “TRIBE” of hypocrites. If you want to salvage what little community, dignity and reputation that is left I strongly advise some long-term thinking

Focus on the ‘trust’ instead of the ‘less’ in ‘trustless’, and avoid being a scar-tissue reminder for many that FEI was just another greedy DAO in web3 sheep’s clothing

I quit the policy pool after being affected. Is there a snapshot that can help me recover the loss?

Will 22,000 ETH convert to DAI before merge? What If 22,000 ETH receive candies like $ethpow something. Should take this into consideration.

I am one of the Babylon Finance users, I lost 6 figures combined in The Garden Of Eth and Stable Garden. We should imo be treated as individual users.

TRIBE users already voted to reimburse all hacked victims in the original vote, however result was ignored and a “new vote” was issued see https://twitter.com/samkazemian/status/1560922664943775745?s=20&t=KgFJE-2ex65nYEgxgvGxtg

we should advocate for full repayment to everyone regardless of individuals or daos, there are retails and individuals behind daos as well. if this proposal passes, daos like frax, olympus, balancer should start a litigation against @FeiLabs

Full repayment must be done, this is quite embarassing and disgraceful.

The tribe holders voting to raid the treasury for their personal gain, before all hack victims are paid back, is shameful and borderline fraud. There is nothing more valuable in life than Trust. If you continue with this plan, you’ll be permanently ruining your reputations and it will not pay off in the long run. No one could know this happened and trust you as a business partner, employee, or customer.

First, I’d like to thank @joey and the Fei Labs team. Fei has been at the forefront of multiple important experiments for DeFi as a whole; PCV, protocol:protocol mergers, and now, a DAO wind-down. These experiments are what future teams learn from, and build from–Fei will certainly have a chapter in a DeFi textbook one day!

Second, thank you for initiating a wind-down proposal to the DAO; it takes a lot of courage to recognize the need to make a hard decision, and to make it. Overall, this proposal will leave the entire Tribe ecosystem in a better place.

While DeFi might have its own rules and technologies, this wind-down process should learn from (or be inspired by) widely accepted principles from finance; that “creditors” be fully repaid before anybody else benefits.

This proposal is a major event for DeFi, and I am excited about the TRIBE rallying together to get it right.

Blacksage/Buckerino from the Uniswap Community over here.

I wanted to chip in with a couple of points. First of all, the past actions of the dev team regarding the payback of the hack victims was a mess. It was a mess, but it was not an illegal mess. Immoral? Sure, very much so.

However, reading this proposal raises some serious concerns regarding what legal liability the core developers might be forcing upon themselves. All the people who have mentioned the hack victims as creditors - this is pure non-sense. Fitting an incredibly specific term with a narrow definition onto the hack situation will not be upheld in any court.

On the other hand, the core developers might be exposing themselves to different types of lawsuits as there are glaring gaps which could be exploited by any capable lawyer out there.

It could be argued that the core developers of the protocols owe fiduciary duties against multiple stakeholders. This primarily concerns investors, but could extent to customers as well. Ignoring audit complaints, not publishing specific data upon which you base this proposal, and the lack of communication could all be construed as the core developer team is not acting in, “good faith” neglecting their fiduciary duties owed to the protocol and the stakeholders.

Also, another major sticking point could be the law concept of, “unjust enrichment”. This has been applied in some recent court cases in crypto hacks. Having a lawsuit based on such accusations could be also more easily proven given the allegations of insider trading shortly before this proposal hit the forums. Arguing the devs are trying to enrich themselves in an unjust manner given the recent hacks, the ample funds to wind down with dignity, and the suspicious trades could prove to be more trivial than you think.

My advice to the devs would be to make the victims whole, sell the tokens, and wind it down with whatever honor there is left on the table. There is no reason to be drawn into a long legal court battle where the odds are (most likely) stacked against you. Oh, and I forgot to add that there CERTAINLY WILL be a lawsuit if it passes in its current form.