Agree, considering the turmoil market condition, all actions should been taken ASAP.

Would be in favor of swapping ETH<->OHM rather than reducing the current size of the stablecoin reserve.

Also Fuse hack repayment is going to cost ~30M in stables in the current execution plan that @klob is working on, where the hacker’s bad debt is repaid to be able to re-activate affected Fuse markets.

If the price of TRIBE decreases, more FEI enter circulation, the way this vesting is made (LP position).

Also this raises the question of : would anyone use FEI under these circumstances, if they know the PCV is not large enough to cover all FEI redemptions ? Partner DAOs might be comfortable holding through the winter, but it may affect the narrative the Tribe DAO is having about FEI, and reduce/delay user adoption.

I personally think we should act soon, and while an ETH sale is not the most elegant solution, it is something we can predict the effects of, and can execute quickly.

Soon always better than delay, No matter how much ETH decided to been sold.

The marco did’t give a V-shape opportunity for us, stay safe in winter is priority now.

I’m a bit hesitant on making a singular large swap of assets.

Is there a way to do this in tranches/steps or only sell ETH (or other assets) when some sort of trigger (say % backing or ETH prices) is activated?

Any update on selling ETH ? Also what is the consensus on selling may be 20% of more ETH right now, excluding the ETH sell to back the stables ? This way if ETH goes lower, we have dry powder to buy more ETH and if we rip from here then we can get on the train at a higher, which might be that bad since everyone here is in the ETH to 10k+ in the years to come train.

What was the result of the vote.

Following the veto snapshot vote posted by @OneTrueKirk that has not succeeded (proposal NOT vetoed), 2 hours ago the Guardian multisig executed a transaction to move 20k ETH to the ETH PSM.

So far, 223 ETH worth of FEI have been redeemed by a MEV bot.

The ETH PSM is in “redeem only” mode and the DAI PSM is in “mint only” mode, so there should be a sell of the 20k ETH over time, and possibly an inflow of DAI in the same period.

A Tribal Council action was proposed to:

This follows similar logic from the above post to increase stable backing for FEI.

With the turbulence in the broader financial and crypto markets, Fei should consider diversifying the existing PCV further. Including less volatile assets in the PCV will allow the Protocol to maintain a higher collateralization ratio and to better endure periods of extreme volatility. TIP-111 is a great first step in that direction.

Following TIP-111, we would encourage the community to consider further methods to increase the stable backing of FEI, potentially to 90% or more (after accounting for repayment of the Rari hack). Doing so will enhance Fei’s resiliency and allow it to navigate the current market environment safely.

Totally agree, I would go further and make an assertive statement: every FEI backed by a decentralized stablecoin. Imo this reduces the governance risk of the uncertainty on pcv management and provides more safety to the market in the current conditions. Following this, the team can have more peace of mind to focus on advancing the product roadmap that will create more use cases for Fei as Turbo and others.

In another thread I shared a the spreadsheet of the current state of the PCV : 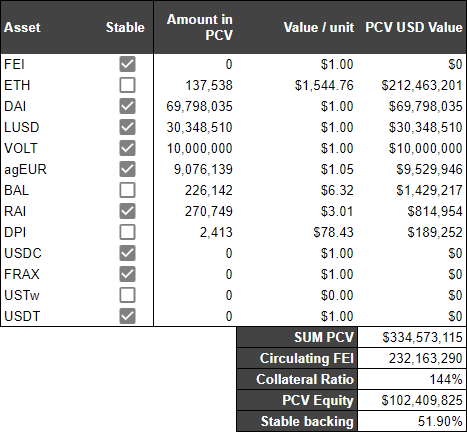 Given the current macro environment and state of the PCV, I believe we should move much more aggressively on increasing the stable backing of FEI. This topic has been in talks for over a month now.

A lot of comments are going in this direction in the community.

If we consider Lido as illiquid (staked ETH is suffering from a depeg right now, and ETH staking rewards is the best income for the DAO right now), that leaves us with the reserves in Aave/Compound/Balancer/Tokemak to work with.

Over the course of next week, the TC can take action to prepare withdrawal from Tokemak and Balancer gauge, to make an additional ~28k ETH available and liquid for further action.

Following these actions, some ETH can be sold to finish bringing the FEI stable backing to 100%.

The privileges needed to execute this plan are :

While some of these might be Guardian actions, and these usually don’t go through governance, given the impact this would have on the protocol, I will publish this plan as a Snapshot vote over the next 2 days to gauge the sentiment from all stakeholders. This execution plan will also be subject to the approval of other Guardian multisig signers, and Tribal Council members.

We have an amazing community of builders and the potential for our product is incredible. These are bad times and it sucks to have to take such decisions, the time is not optimal (is it ever?) but I think it has to be done. The current collateral ratio is below 150%.

The snapshot vote is live for the next 2 days :

I strongly agree with this. It’s truly important that we preserve the ETH (and the equity) that we have as a DAO, and we can’t let market conditions dictate our existence. By moving FEI to 100% stable backing, we can preserve the amazing dev team, community, and brainpower we have at the Tribe.

Slightly an aside, we should consider the risks of stETH depeg and derisk this into ETH and eventually other stable assets.

I Don’t know if the community is smart enough to vote to sell eth if im being completely honest.

It seems they don’t want to reimburse the hack to protect PCV but they absolutely refuse to Sell Eth.

The tribe seems to not care about its Equity value in USD after not selling eth after 6 -10-20% drops.

We’re supportive of this plan.

NopeDAO veto link for the Tribal Council proposal to request the Tokemak withdrawal as part of this TIP: Tally | Tribe NopeDAO Proposal

It seems prudent to reduce our stETH exposure at this time given the current liquidity crunch on curve and the small amount of bidders at the current price who are likely there for the LDO and CRV incentives.

stETH could lose another 10-20% of its value from here as investors flee to more liquid instruments. 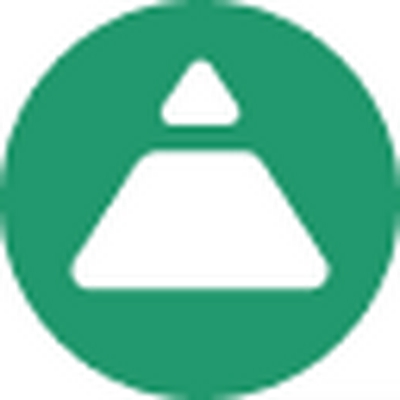 On-chain vote posted. The on-chain actions also include cleanup items from FIP_104b to claim the DPI and DAI that are remaining in the auction pool deployed several weeks ago.