[Edit: proposal increased from 1M over 3 months to 4M TRIBE over 6 months]

Allocate 4m TRIBE from the TribalChief over 6 months as incentives to Aave FEI borrowers, conditional on both the Tribal Chief upgrade passing and FEI being added to Aave.

This post is dedicated to Aave incentives because there are unique practical constraints on how we can include these in the TribalChief incentives. The intention behind this post is to unblock the main TribalChief snapshot and rollout and separate the Aave considerations out. Having the incentives publicly approved by the Fei Community will provide further demonstration of partnership and strengthen our proposal to add FEI to Aave.

First, aave was the most approved incentives program behind the current FEI-TRIBE LP rewards on this snapshot: Snapshot

This would indicate broad community support for pursuing some form of incentives.

Here are the main constraints:

For these reasons, the only viable way to apply incentives to AAVE is to allocate a single chunk of TRIBE rewards to be distributed with a target end date in mind. This approach would mean Aave cannot be a part of the TribalChief incentives program as those rewards change as new programs are added and are calculated per block.

Additionally, we should only incentivize borrowing so that we avoid farming our own TRIBE rewards as a DAO. The benefits of incentivizing borrowing are that it stimulates the demand side for FEI on one of the largest lending platforms. It helps subsidize using FEI for leverage to compete with DAI, USDC, and USDT.

We can allocate something like 1M TRIBE from the total 130M TRIBE remaining for rewards distributions.

These would be essentially non-revocable and committed upfront for 3 months. We can evaluate extending the rewards program before the 3 months are up.

Development will be carried out by @joey and code review by the Aave core team.

Straw Poll [Closed when proposal was 1M over 3 months]

Aave has the largest market share of the lending market, so I’m in support of incentivizing the borrowing specifically. I’d also supported more aggressive rewards/longer timeframe.

A key parameter here is the amount of TRIBE incentives to place on AAVE borrowing. Here are some graphs that illustrate what the FEI AAVE pool will look like at different levels of utilization and incentives.

The parameters here are: 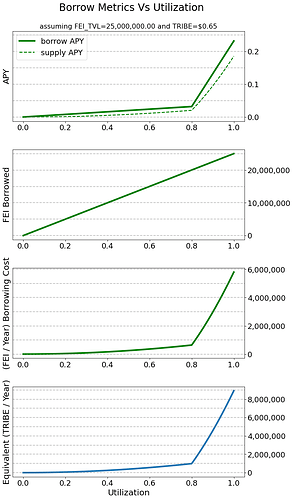 The last graph above shows the amount of TRIBE incentives that would need to be placed on the pool to make borrowing free at different levels of utilization, assuming all other parameters (TVL, TRIBE price) stay constant.

Below is a graph of the break-even supply APY at different levels of TRIBE incentives, assuming that the other parameters stay constant: 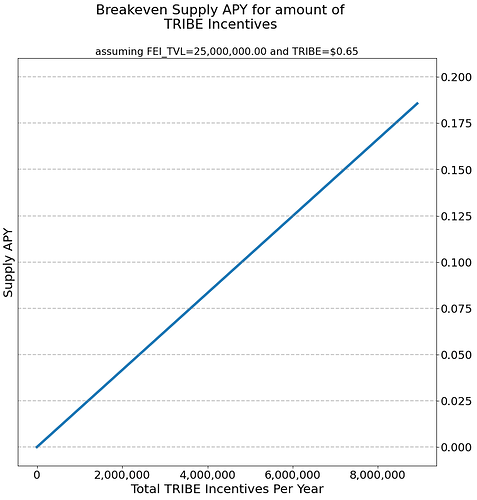 From the above graphs, it can be seen that 4 million TRIBE over 6 months is a fairly aggressive incentive on the pool. Equivalent to 8 million TRIBE per year, this would produce a breakeven utilization above 90% and supply APY nearing 20%. Of course, the market would likely respond because it would become more attractive for lenders, which would increase the FEI TVL and decrease borrowing costs.

If TVL on the FEI pool rises from 25M, then the breakeven supply APY levels for 8 million TRIBE / year would decrease to about 8% for 50M FEI, and 4% for 100M FEI. Also note that if the price of TRIBE changes these numbers will also change significantly.

For additional context, we can look at the borrowing incentives on other stablecoins on AAVE:

This is quite a large range, but it makes it seem like 4M TRIBE is in the right ballpark. It would be nice for the market for FEI to be larger than GUSD, and it isn’t reasonable for FEI to start off near the big 3 stables.

For additional context, allocating 4 million TRIBE to AAVE over 6 months is equivalent to about 2 weeks of TRIBE incentives (staking uses about 2M TRIBE / week).

FEI has been listed on AAVE! This vote will enable incentives and supply initial liquidity per FIP-13